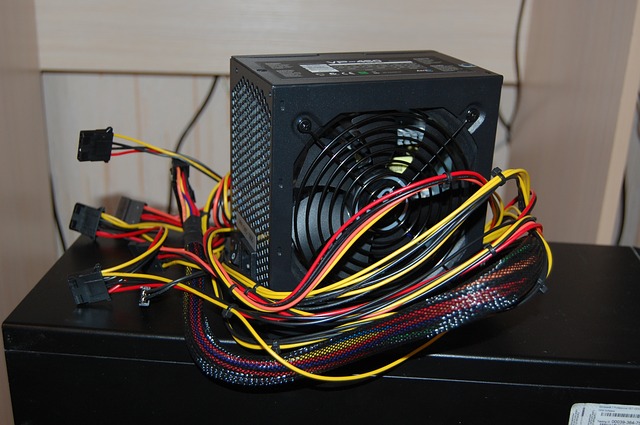 A computer power supply takes the AC power from the wall socket and converts it to low voltage DC current that can be used by your computer.  Normally different connections from the supply supply 3.3 volts, 12 volts, and 5 volts.  The different voltages are used by the various components of the system, with the lower voltages used by the motherboard and CPU, and the higher voltages used by the attached peripherals.  There are connectors attached to the wires, with the fancier models having connectors for more, and different types of peripherals.

Power supplies use transformers, capacitors, and other components internally to supply the different voltages.  Those and various heat sinks are housed within a metal box that is attached to the computer case.  Many have a built-in fan to help dissipate the heat.  Laptops usually use an external power supply that has similar components housed in a plastic box.

You Can Get Hurt!

As with any electronic device a power supply can shock you.  It is even possible to get a shock from an unplugged supply because some charge is stored in the capacitors.  Use common sense.  Don’t open the case of the power supply, there is nothing serviceable for the average person.  And obviously unplug the computer before messing with the power supply.  I have installed hundreds of power supplies over the years with no problems at all.

I have found a bad power supply is the most common computer hardware problem.  Symptoms range from nothing working at all to unexpected shutdowns of the system.  With these kinds of symptoms the first thing I usually try is replacing the power supply, so I always have a spare on hand for testing..

When replacing a power supply you really have to watch the quality.  My experience with very cheap power supplies is that a certain percentage will be dead on arrival, and others may die after a few months of use.  If you check the reviews there is usually a “sweet spot” where the price is reasonable but the quality is still good.

How Many Watts Do You Need

The power of a particular power supply is usually measured in watts.  Thay can range from as low as 200 watts up to 1000 or more.  Gamers have driven the availability of high wattage power supplies in order to handle the power needs of one or more high end graphics cards.  Here is my recommendation based on experience:

How to Replace a Power Supply in a Desktop

This procedure is taken from my book “Your Computer Business.”  It is available here:

Screwdriver (preferably with a magnetic tip)

A sturdy worktable with good lighting

Four screws to attach the power supply to the case

1.  Set the computer on the table with the back facing toward you. (Of course, the computer must be off, with the power cord removed.

3.  Lay the case down on the table flat, with the front to the right, and the back to the left.

4.  The power supply is the rectangular box, usually in the upper  or lower left-hand corner with lots of wires coming out of it.  However, before you can remove it you must disconnect all the wires to the various devices.  These include:

Sometimes a 6 or 8 prong auxiliary power connector on the motherboard.

Anything else that is connected to the power supply.

5.  After all the various power cables have been unplugged you can remove the old power supply.  It is held in place with four screws on the outside back of the computer case.  Be careful not to damage any sensitive components while removing the power supply.

7.  Reconnect the power cables to all the same devices that you previously disconnected. These include:

Sometimes a 6 or 8 prong auxiliary power connector on the motherboard.

Anything else that is connected to the power supply.

8.  Replace the case side and test your installation by booting the computer.