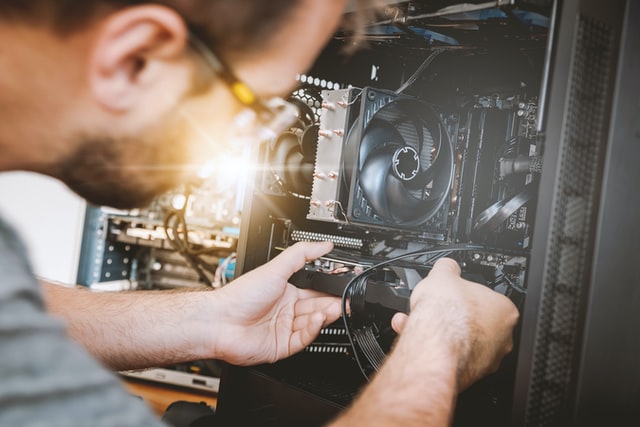 Below are just some notes on common computer problems I have seen over the years.  They are in no particular order.

Is it plugged in?  Don’t laugh, maybe a surge protector is turned off!

Bad Power Supply – This is the most common problem I see.  Luckily, it is usually not too difficult to replace.

Bad Motherboard – Motherboards have gotten much more reliable but they do sometimes go bad.

Bad CPU – Very uncommon, I’ve only seen it once.

Bad or Loose Memory Stick – in this case you will usually get a tone of some kind from the motherboard speaker.  Memory has gotten a lot more reliable but maybe something was jostled in a recent move?

Are multiple people using the Internet at the same time?  This is especially true if there are multiple streaming or online gaming services running.

Is your ISP providing the speed they advertised?  Use an independent online speed test.

Is Windows or your Anti-Virus software doing updates?  This is probably the most common.

You may also want to check if a direct wired Ethernet connection is better than your wireless connection.

Do you have enough memory?  Use 8 Gig or more.

Too many applications open at once?

Sometimes a slow computer can mean a mechanical hard drive is about to go.  Make sure your backups are up to date!

Windows updates can slow a computer to a crawl.  Sometimes an update will break something that was previously working.  I recently had a Windows update break my wireless connection on a laptop.  Windows 10 has gotten much better with both these issues, but things still occasionally happen.

If your hard drive is making a lot of noise it may be a sign that it is about to fail.  Back up anything important as soon as possible.

Fans Noisy or Not Working

A non-working CPU fan can burn out a CPU!  Luckily, most motherboards have a temperature sensor that will shut down the computer before that happens.  Replace the CPU fan.  Bad case fans take longer to cause a problem but can cause a video card to overheat.  And video cards are getting expensive so you want to take good care of them.

Surprisingly, most printer issues can be solved by simply turning the printer completely off and then turning it back on.  The printer will run its setup and may fix the issue all by itself.

Another common problem is paper jamming.  Start by trying some good quality paper especially designed for the printer.  If it keeps happening you may have a mechanical issue that you can’t fix yourself.

Most of the time I find this is either a memory problem or the computer is overheating.

In many cases you can monitor the temperature from within the BIOS.

If you have installed new memory or changed the configuration that may be your issue.

Most commonly this is a bad power supply.

Another possibility is overheating, especially likely if you start the computer cold and it runs fine, but after several minutes it restarts.

Computer monitors have gotten much more reliable, even cheap ones.  If you start seeing black lines or many dead pixels you may need a new monitor

Occasional display issues, especially with games, may be fixed by updating the drivers from the manufacturer’s website.

You may also have to dial down the settings from within the game.

Computers have gotten much more stable, but they are not perfect.  Many times if you take your time you can diagnose the problem yourself!

Photo by JESHOOTS.COM on Unsplash