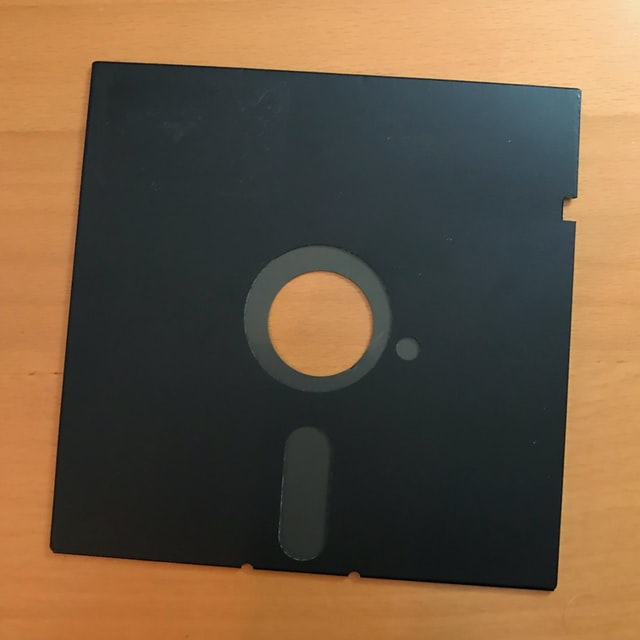 These days there are so many options for saving your data.  Much is stored online now but if you must stay local you have traditional hard drives, SSDs, CDs, memory cards, or flash drives of ever increasing capacities.  This wasn’t always the case.  Those of us old enough can remember floppy drives of various types and capacities.

I can remember my first floppy drive.  It was for a Commodore 64 and the drive itself was a brick about 14 x 9 x 4 inches (my guess from memory.)  I was thrilled!  Previously I relied on cassette tapes that sometimes took 20 minutes or more to load.  This first drive used 5 ¼ inch floppy disks.  They really were “floppy” and somewhat fragile.  The disk itself was housed in a paper sleeve.

By the mid seventies the  8 inch disk was considered too large and Wang Labs came up with the 5 ¼ inch floppy in 1976.  These were more convenient and less expensive.  In larger quantities they could be had for about $1.50 each ($6.00 in today’s dollars.)  Throughout the late 70s and early 80s the 5 ¼ floppy became the standard for personal and mini business computers.

Sony introduced the 3 ½ inch floppy in 1981 but they didn’t become widespread until the mid 80s.  They had several advantages besides their smaller size.  They had a plastic housing and metal shutter that exposed the magnetic media beneath.  The shutter wasn’t perfect.  They sometimes bent and would get stuck in the drive or get ripped off entirely.  Capacity eventually reached 1.44 MB.

There were many other options that were less common.  Various companies offered 2 inch, 2 ½ inch, 3 inch and other kinds of 3 ½ inch floppies.  They were usually expensive and eventually everyone converted to the 3 ½ inch standard.

I should mention one other kind of floppy that I personally found very useful.  A company called IOMEGA began producing zip drives that used a disk with a capacity of 100 Meg (later increased.)  These were fairly reasonable in price and very handy.  Zip disks are still available today on Amazon and used by retro computing enthusiasts.

I think I still have my old Zip drive around somewhere.  It uses a parallel port interface so it might take a little research to get it working.  This could be a fun little project.  I still have some data on old zip disks.  It would be interesting to see if they still worked and what was on them after 20+ years.  (But I digress…)

What Can You Still Buy?

I already mentioned that you can buy Zip disks.  The drives themselves are only available on EBay or similar sources.

The drives themselves are a different story.  On Amazon or Newegg they are expensive if available at all.  Ebay might be a better bet.  There are 3 ½ inch USB powered drives that might be handy if you need to recover some data stored on old disks.

So what are your experiences with floppies?  Anybody ever leave a magnet on a stack of floppies or have a similar story?

Photo by Lucas Myers on Unsplash