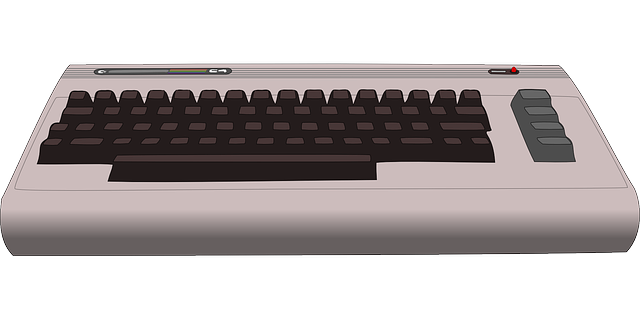 In this article I talk about the Commodore 64.  This is what I hope will be a series on my experiences with older computers during the years.

I have such fond memories of the Commodore 64.  While it wasn’t the first computer that I owned it was certainly one of my favorites.  I talk more about my road to programming, of which the Commodore 64 (C64) was a big part in another post.  .  Please see my “Accidental Road to Programming” here.

The first computer I owned was actually a Timex, but that had severe limitations, including a tiny keyboard, a TV interface, and huge loading times for software via a standard cassette recorder.  However I did learn some limited BASIC programming, which was built in.  So I can credit the Timex for getting me hooked on programming.

The C64 was a vast improvement, with a much more powerful BASIC built in.  It also featured a real keyboard, an available real monitor, and much more.

I actually wrote my first real piece of software for public distribution with the C64.  It was called “Lifestream,” or something like that and had to do with goal setting.  I distributed it as Shareware on early online sites, long before the Internet.  For those too young to know, Shareware was a way of distributing software using a “Try Before You Pay” model.  I don’t remember making any money but I did learn a lot.

The C64 made its debut at the 1982 Winter Consumer Electronics show, as a successor to Commodore’s fairly successful VIC-20.  It sold in retail stores at a starting price of $595.  I think I bought mine at Toys R Us!  That price point was well below what computers usually sold for and that made it very popular.

The C64 came with an 8 bit processor and 64K of memory.  It included a 16 color graphics chip and a SID sound chip that allowed it to act as a music synthesizer.  Video Resolution was 320 x 200.  Initially it came with a TV video adapter but monitors and many other peripherals soon became available.

The C64 was extremely popular as a gaming platform.  In fact it is estimated that over 23,000 games were available.  And was I hooked on the games!  I can remember heading out almost every payday and buying a new game.  They were expensive, about $50 at a time when $50 was a lot more money than it is today!  The games eventually came out on floppy disks, which may seem slow today but were much faster than the alternatives at the time.

The C64 came with BASIC built in on ROM.  I remember writing many programs using BASIC.  There were books available that helped greatly with the learning curve, but what was great was that you could make the computer actually do something without too many lines of code.  I really got hooked on programming with my C64, even though I wasn’t a programmer at the time.  It eventually became my career.  (Again see this post.)

The successor to the C64 was the 128, which was very similar but with more memory.  Then came the Amiga, which was far ahead of its time.  I was equally addicted to my Amiga, but that’s a separate story.  Unfortunately  Commodore made some bad business decisions and ended up going out of business.  I remember being devastated by the news.

I eventually donated my C64 to a young teenager who had no computer.  It included a huge library of games.  I lost touch with him but hopefully it helped him develop a love of computers like it did me!

The C64 still has an active following of people with fond memories of the machine.  In fact you can even buy a “Mini C64” that has the original BASIC and many games built in.  I recently saw it on sale for only about $45.  I may give it a try!