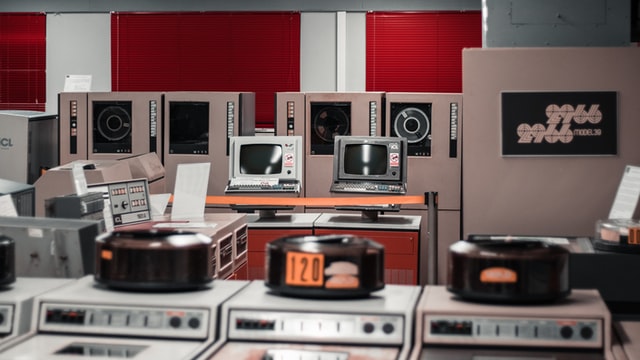 I thought it might be useful to review the kinds of computers that have developed over the past 60 years or so.  So here we go:

Mainframes are large computers mainly used for processing very large amounts of data.  They are typically used by large corporations and organizations.

Mainframes started being available in the 1950s and are still sold today by companies such as IBM, Fujitsu, and Hitachi.  Over the years processing that used to be only accessible on mainframes has slowly migrated to minicomputers and client/server networks.

My experience with mainframes found them mostly at big banks.  Some of the big bank software was built in the 1960s to run on mainframes and is still in use today.  It has been expanded and modernized with PC networks and middleware.  Some banks are even bringing older COBOL programmers out of retirement to keep those old systems running.  (COBOL is a business centric programming language used by many older mainframes.)

Minicomputers came out in the 1960s and were smaller and less expensive than mainframes.  They can be considered to sit in that middle ground between mainframes and microcomputers.

Minicomputers were primarily used for accounting and other specialized applications.  They were sold by DEC, Data General and other vendors.  Microcomputers and Workstations have largely replaced minicomputers as they become more and more powerful.

Supercomputers are normally large super high performance computers.  They can be room sized and are very expensive.  They were originally built by companies such as Cray and Control Data.

Applications include quantum mechanics, research modeling and weather forecasting.  There are only a small number of supercomputers in existence.  The US has some, as do China, Japan, and Switzerland.

Microcomputers are what most people think of when we talk about computers.  They are smaller than mainframes or minicomputers and much less expensive.

Microcomputers got their start in the early 1970s.  The earliest well known one was the Altair, which was actually sold as a kit, and had no interface such as a keyboard, or even a screen.  Results were simply displayed using indicator lights on the front.

From there things developed rapidly, especially in the mid 1980s, with machines like the Commodore 64, Apple II, and Radio Shack TRS-80.  I have fond memories of my Commodore 64 and credit it with instilling my love of computers and programming. (See more about my early experiences with computers “My Accidental Road to Programming.”)

These days microcomputers are just called PCs.  They keep expanding in power.  Early mainframe users would be in awe of what an inexpensive PC can do today.

I have recently read a fascinating book about the beginnings of microcomputers.  It is called “Fire in the Valley” by Michael Swaine and Paul Freiberger.  Check it out if you are interested to learn more.

Laptops are simply small personal computers that are easily transportable.  Although they came out in the late 1980s, they have become much more popular in recent years.

PDAs were small handheld computers that became widely available in the 1990s.  They were used for basic applications like storing contacts and simple note taking.  They have been replaced by Smartphones.

Workstations are very powerful microcomputers normally used for technical and scientific applications.  As normal PCs have become more powerful the lines have blurred between what is a workstation and what is just a powerful PC.  Generally what is called a “workstation” is more expensive!

Netbooks came out a few years back.  They were basically more basic laptops with smaller screens and generally less performance.  They have morphed into simply smaller (but sometimes very powerful) laptops and Chromebooks.

Chromebooks are simply laptops running Google’s Chrome operating system.  They can vary quite a bit, from small machines that mostly replaced Netbooks to larger and more powerful laptops.  The big difference is that they primarily rely on an Internet connection for most applications.

Tablets can be considered to be small screen sized computers.  They have become very popular with models like the iPad.

Smartphones took over from PDAs and combined a cellular phone and small computer.  They now have hundreds of apps and are only limited by the size of their screen.

Smart Watches are becoming more popular and combine a watch, phone, and limited computer that you wear on your wrist.  They are even more limited by their small screen size.

Who knows where computers will go from here, but I’m sure we’ll all be amazed!

Photo by Alex Motoc on Unsplash