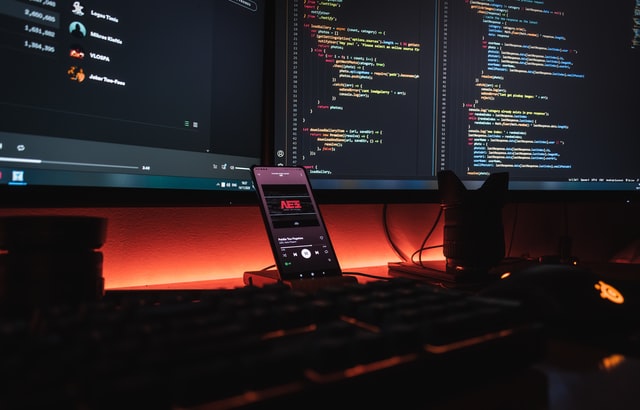 NORAD stands for North American Air Defense Command.  So you must be wondering what I’m talking about.  And no I’m not talking about your own missile defense, although that in game form has already been done.

My own NORAD is kind of a family joke.  I’ve always wanted my own setup with multiple monitors clustered around one desk.  I was inspired by the setup in the giant command room in the movie “Wargames”, one of my favorites from the Eighties.  My wife took that and called my wish my own “NORAD” and it has stuck.

For years the multiple monitor setup was impossible.  Monitors and computers were expensive.  Trying to run a few big old CRT monitors quickly heated a room to intolerable levels.  Thin LCD monitors changed that but they were very expensive when they first came out.

I’ve been into computers for a long time, starting with a Timex (see this post,) and a Commodore 64.  Over the years I began building computers for myself and others, and if you are into computers they have a way of multiplying.  I was lucky enough to have a big basement and at least for the last couple decades have always had a number of computers, and eventually LCD monitors laying around.  But I was busy with my career and never did get around to building my “NORAD”

When I retired from my full time job one of the first things I did was to work on my NORAD.  I wanted to put it in my office (the basement is unfinished,) so I decided to limit my setup to four screens, two on top and two underneath.  Initially I used a mishmash of LCD monitors I had laying around.  I looked at reviews for “four monitor” stands and finally settled on one that I ordered from Newegg.

Next up was a switchbox so I could control four monitors from one keyboard and mouse.  There are all kinds, so again I consulted specs and reviews.  I wanted one that would work with Windows, Linux, and Mac.  I didn’t own any Macs but wanted to future proof my setup.  I ended up with one that controlled a USB Mouse and Keyboard and had indicator lights and a simple push button to switch between systems.

My first setup consisted of a newly built Linux system with a mid level video card.  I used that to have a dual lower level monitor setup that served as my most used system.  My upper left monitor was connected to a Raspberry Pi I had laying around.  Finally I used an older computer to run another Linux system using Lubuntu, which runs fine on older systems.  I had a blast with my new setup, sitting in front of my little “command center.

Over the last two years I’ve improved my setup.  First as LCD monitors have come  down in price I standardized my monitors to four 24 Inch.  They are very stable on the monitor stand.  I also have a way of switching systems around.  I usually leave my “main” Ubuntu Linux system alone but switch out the others to whatever I’m experimenting with.  I even added an old VGA two position switch box.  That allowed me to add yet another system.  So right now I have:

I’m a little embarrassed to say how many computers I have now.  True geeks will understand!  You can never have too many computers!  Most of mine are either home built or bought used.  So besides my “NORAD” I have a three monitor “main Windows system,” and assorted laptops going at various times.  Life can be good!

So what crazy setups do you guys have?

Photo by Fotis Fotopoulos on Unsplash